Miami Springs: The Edge of the Everglades

Marie had grown up on “the Beach”, but it was too expensive for a young couple to buy a home on that island for their growing family. And the GI bill, which offered mortgage assistance, only applied to new housing. Marie’s high school friends, her church and her family (Aunt Duckie) were on Miami Beach. Dad had finished night school and had been hired as a land surveyor for the City of Miami Beach. Neither one wanted to leave the area. To buy a home of their own, they would have to leave.

While Paul and Marie were considering their options they celebrated their daughter’s first birthday on Miami Beach with friends and relatives. Generally Dad was the photographer so we’ll see fewer photos of him. Both my parents were anxious to take pictures of our family life together–that accounts for all these photos from 74 years ago.

Commuting in 1947 was not commonplace, but it probably seemed the solution to the situation. Miami Springs was ten miles away, about a 30-40 minute drive with no easy, direct route. It was on the western edge of the developed area. Beyond was the untamed Everglades, also known as “the River of Grass”. After 1945, the Miami Beach and Miami area experienced a post-war sprawl when “hundreds of thousands of GIs came to Miami to start a new life”.1

I’ve found a variety of ads by Miami Springs builders directed at veterans. Here is one: “Selling for $11,950, veterans require a down payment of $730 which includes closing costs. Monthly carrying charges come to approximately $75. Set on a minimum size lot measuring 75 by 125 feet.” Other builders emphasize hurricane-proof buildings. Another builder promised “atomic bomb protection” and no down payment for veterans. It seems like it might have been a “buyer beware” market for these young newlyweds! [Families in the United States had an average (median) income of $3,000 in 1947.]

In choosing Miami Springs as their new home, Paul and Marie either “did their homework” or made a lucky choice. In Miami Springs, “deed restrictions were rigid, and strict building and zoning guidelines called for masonry construction, tile roofs, proper set-backs and landscaping.”2 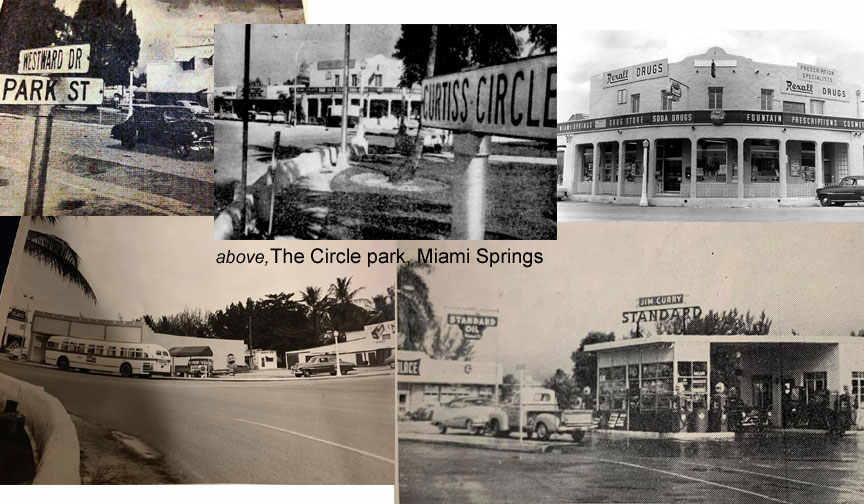 About Miami Springs in the 1940s
Miami Springs was a planned community built with a Circle Park surrounded by few small businesses. Westward Drive, a divided parkway, moved west to the residential sections. Famed aviator Glenn Curtiss and his partner James Bright had developed the area in the mid 1920s during the “Florida land boom”. They developed Hialeah, which was much larger and Country Club Estates where Curtiss built his own mansion. Country Club Estates was adjacent to the airport and later was renamed Miami Springs. The tiny community was a mere three square miles but supplied water for the entire metropolitan Miami area until the mid-1990s.

One historian described the post war growth. “In 1930 the name of Country Club Estates was changed to the town of Miami Springs in recognition of the natural spring of pure water that was located beneath the town. Miami Springs continued as a small, mostly residential community until after WWII. As the airline industry at the 36th Street Airport [now Miami International Airport] began to expand, many airline employees were transferred to the area and Miami Springs became a convenient location for them to live. A new “building boom” continued for many years. The airline industry was a major factor in the economic growth of the town.”

By early 1947 Marie was pregnant with their second child. The family of four would need that new home soon. When Marie and Paul decided to move to 336 Linwood Drive in Miami Springs there were few houses on that block. Marie would be stranded there all day with no neighbors and no transportation. I believe they had a phone since the house was built with a small nook in the hall by the bedrooms to hold the black rotary dial phone. This isolation would be an adjustment for her. The radio would be her companion.

Karl was born September 7th 1947 in the midst of a flood caused by Hurricane Vi–one of five storms that year! With this flooding did my parents wonder about their choice to live on the edge of the Everglades? Paul built a catwalk-like ramp to bring Marie and Karl into the house when they were released from the hospital after his birth. See above in the center photo with Paula on that ramp. Below are more photos of the Circle park, city hall and businesses during that ’47 flood. Karl was a happy baby and for the most part, I liked being a “big sister”.

Marie and Paul bought a two bedroom, one bath, stuccoed masonry house with a durable tile roof. Stucco is very affordable and is virtually maintenance-free. The compact living room served as an all-purpose family room. Both bedrooms were small, the dining room was actually a wide hall leading to the two back doors. The kitchen we used for the next twenty-five years was more like a galley. One tiny window was inadequate to keep the kitchen cool when it was hot–which was most of the time. No central heat or air conditioning. In one corner of the living room was a small gas ceramic heater. Later Dad built a mantel around the hearth-like heater so we could hang our Christmas stockings. When we did have cold nights, we slept under electric blankets.

With mild weather year round, all of us spent time outside in a variety of activities including hanging our daily loads of laundry to dry on the large clothesline–not one of my favorite chores. Later, as the family grew, my parents chose to build a large addition rather that leave our accustomed neighborhood. I’d guess the house was 800 to 1,000 square feet with no garage and a tiny hard-to-get-to attic. For many years we thrived in that house.

Norma and Sig Drury bought the house next door. Norma and Sig were high school friends of Marie and had been the attendants at Marie and Paul’s wedding in 1945. Their house was almost exactly like the basic house that my parents bought. They did not have children for the first few years. We were quite neighborly with them. The first dog I ever knew well was their dog Spicy, a gentle black and white mixed bred dog. They planted orange trees and grapefruit trees in their backyard. Once established, we enjoyed picking our own fresh fruit when they had extra.

Sometimes on a weekend we would drive over to Miami Beach to visit Duckie. At times I would spend days with her. We’d visit her Cabana club for my swimming lessons and ice cream. Here’s a description about the Cabana club of the late 1940s as mentioned in the ad below, “Patrons went to the bathing casino [cabana] to enjoy a day in the surf or to swim in the pool. Upon entering, guests would proceed to the lobby desk and rent a locker, wool bathing suit and a towel.”4 Of course I had my own bathing suit. I have vague memories of jumping into the pool as a toddler. Duckie doted on me as a child and I enjoyed her company.

Both my parents had a strong can-do attitude. Marie was a creative sewer and a resourceful homemaker as well as a constant reader. Paul gardened and taught himself carpentry and building. As soon as we were old enough we were playing games and sports–from kickball to ping-pong and basketball with him. Early on he planted a gardenia shrub since Marie loved that flower. Later he planted a key lime tree which thrived in our climate. We enjoyed those key limes almost year round–real key limes are yellow when ripe–not green. For special occasions, Mother would make us key lime pie–still one of my favorites.

Mother’s Aunt Duckie acted the proud grandmother with me and arranged this series of portraits. Mother designed and sewed each of the dresses–some were organdy, most were cotton. The one on the far right was light blue linen with white eyelet trim. Both Duckie and Marie enjoyed dressing me in the idealized image of a little girl–my training started early. I can see the contrast when compared to the earlier candid photos or my school photos. The staged portraits are a tiny slice from real life. For one thing–I’ve never had curly hair. Illusions….

Yet, it is all part of the story to be told.

Two:
The Everglades, a unique treasure located in South Florida, is the largest remaining subtropical wilderness in the United States. It consists of 1.5 million acres of saw grass marshes, mangrove forests, and hardwood hammocks dominated by wetlands. It is home to endangered, rare, and exotic wildlife.

Origins of the Everglades
Water in South Florida once flowed from the Kissimmee River (in north central Florida) to Lake Okeechobee (the huge lake in south central Florida). The water then flowed southward over low-lying lands and hundreds of miles to Biscayne Bay (the 35 mile long bay between Miami and Miami Beach), the Ten Thousand Islands (a chain of islands and mangrove islets off the coast of southwest Florida), and Florida Bay (the southern tip of Florida). This shallow, slow-moving sheet of water created a mosaic of ponds, marshes, and forests. Over thousands of years this developed into a balanced ecosystem.

Wading birds such as great egrets, white ibis, herons, and wood storks were abundant. The Cape Sable seaside sparrow, Miami blackheaded snake, manatee, and Florida panther made the Everglades their home. Alligators and crocodiles existed side by side.

The Seminole and Miccosukee Indians settled in the Everglades. Although they battled with the alligators and crocodiles who live in the ‘Glades, they did not interfere with the overall balance of the ecosystem.

The Everglades Today
Today, 50% of South Florida’s original wetland areas no longer exist. The numbers of wading birds have been reduced by 90%. Entire populations of animals are in danger of disappearing. Exotic pest plants have invaded natural areas. Losses of seagrass beds in Florida Bay have been followed by losses of wildlife.

In Marjory Stoneman Douglas’s classic book published in 1947, The Everglades: River of Grass, she wrote, “Unless the people act . . . overdraining will go on. The soil will shrink and burn and be wasted and destroyed, in a continuing ruin.”

[Marjory Stoneman Douglas was the spirited writer and environmentalist who was known as the patron saint of the Florida Everglades due to her ceaseless campaign to preserve the fragile wetlands of south Florida.]

Douglas continued, in a hopeful vein, “There is a balance in man also, one which has set against his greed . . . Perhaps even in this last hour, in a new relation of usefulness and beauty, the vast, magnificent, subtle and unique region of the Everglades may not be utterly lost.”5 Read more here: https://fcit.usf.edu/FLORIDA/lessons/everglades/everglades.htm

This entry was posted in Paula's Memoir. Bookmark the permalink.