Psarosoupa or Greek Fish Soup, All Part of the Adventure! Crete, Part 2

My first morning in Crete I was up early. I had an assignment. Since I had missed the first full day of the pilgrimage, I had not had time to collect some type of “libation” for our ritual ceremonies. We were leaving the big city of Heraklion for Zaros, a rustic mountain town at 9:30 sharp. I had to shop now. My bags were packed.

I’d called Jeanne at 6:30 AM local time (10:30 PM in Arkansas), then I hurried downstairs for my yogurt breakfast and out the front door of our small hotel into a city waking up for a busy Monday morning. I walked toward this old marble paved market street:

Here you see the narrow marble path of the old city market street where I walked that morning. It was just steps from our hotel at Kornarou Square in Heraklion, the capitol city of Crete.

I’d been told by friends at home not to go out alone in the cities, but the night before when our leader CC gave me this assignment she had assured me it would be safe. I tried to follow her directions to the small market shop, but I took a wrong turn along the narrow street lined with stalls into a busy fish market. The marble paving stones were wet as if someone had just hosed down the area. It was slick. I stepped carefully. The crisp morning air was cool. I’m sure my eyes were wide in wonder and I looked like a tourist. None of the bustling male workers paid much attention to me as I tried not to gawk at the colorful variety of fresh fish packed in ice chips. 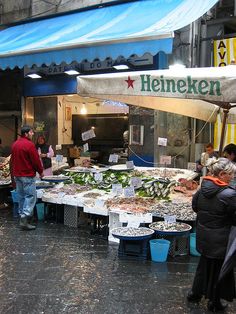 This market looks like the one in Heraklion on the early October morning.

Not my photo, but this is what I saw that first morning in Crete as I wandered around. 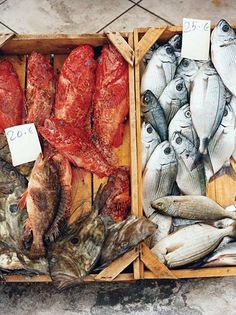 A multitude of different fish to select for a truly fresh meal.

I’d never been in a real fish market. It seems the sea was ready to feed the multitudes. But I had to remember my mission. Wine, olive oil, honey or water—any of the four would be acceptable as an offering of gratitude during our rituals. Once I found the tiny crowded shop I was looking for, I selected a small shapely bottle of local Cretan honey. Days later on our road trip I would see the hundreds of beehives used to house the bees and collect the honey.

It is not surprising that on a large island like Crete people would search the 650 miles of coastline for edible foods especially fish. Fish in Greek is psari, pronounced SAH-ree, so fish soup becomes psarisoupa, SAH-ree-soup-a. Island cultures often harvest much of their diet from the sea. Unfortunately, it seems that the Mediterranean has been over-fished since the 1960s making fish more expensive than previously. Fish markets today serve the local population only because there is no excess to export.

The Mediterranean Sea includes all of the other smaller areas like the Cretan Sea and the Libyan Sea. We visited places on both north and south parts of the island. Our two weeks focused on the central and eastern areas of Crete. Crete is 160 miles long and 37 miles wide at the widest point and only 7 miles at the narrow point. Because of all the rugged mountains running across the center of the island from west to east it is bigger than it looks! Agios Nikolaos is located along the north shore at the narrow section of the island. Can you find it?

Some families in Crete keep rabbits or chickens to serve at special dinners. Christina, a Greek woman who prepared a delicious lunch for our group later in the week, did have rabbits she was raising for her large extended family meals on Sunday. The rabbits were housed in a large hutch located at the back of her house in an attached shed. The rich manure was used on her garden which I am sure helped to account for the huge garlic bulbs braided into abundant clusters hanging above the rabbit hutch.

Fish is a delicacy I’ve long enjoyed. As a girl raised in south Florida, I sometimes enjoyed eating fish caught by my father and brother on one of their fishing days. Any fish they caught that was too small to clean and eat, my dad would bury at the base of our trees as an excellent fertilizer.

As a lacto-ovarian vegetarian for decades, I only occasionally ate fish–usually at a restaurant. However, last year when I started chemotherapy to try to shrink the tumor affecting my right arm, I was encouraged to eat more protein especially fish. Consequently, we began to sometimes buy frozen, wild caught salmon at our local food coop. After defrosting, I used olive oil in the bottom of the baking dish and add several pats of butter on top of the fillets. Sprinkled with dill and baked with thick slices of onion for a half hour at 350 degrees, it was a treat.

Until traveling in Crete, I’d not encountered any fish soup. My first taste of a rich fish soup was in a seaside taverna in the bustling city of Agios Nikolaos. That fish soup was a clear broth containing a tender white fish, onions, potatoes, carrots, and spiced with local herbs. Delicious. Enjoyable, especially when combined with the ubiquitous Greek salad of fresh tomatoes, cucumbers, onions, olives and lots of feta cheese all grown or made on the island! I savored this soup and salad combination three times in two days because it was so satisfying. We ate out doors above the seawall with the tang of fresh salty air.

Late afternoon seaside tavernas along the waterfront in Agios Nikolaos on October 6, 2017

Since returning home I’ve discovered that there are many versions of Greek fish soup including some with a tomato base. Jeanne and I have created our own version of a fish soup enhanced with the addition of heavy whipping cream. Yogurt was a common addition to many dishes or meals in Greece, but we are trying a low carb, high fat diet with no sugar in order to starve the tumor of fuel. So, our choice is cream. We’ve used the wild caught frozen cod available at our coop in 10-ounce packages. See our recipe below. Hope you’ll experiment too.

We know sauteing the ingredients might be preferable, but we chop all and add to the water. The defrosted cod fillets will flake apart after simmering for an hour or two. Hold the cream until 15 minutes before serving and reheat. A roiling boil is not necessary. This creamy soup stores well in the refrigerator for several days and the flavor only increases.
This is a very flexible ingredient list. One could add lemon, potatoes, carrots and more.

Simplicity and fresh ingredients are the secret to Greek cooking. The island herbs add tangy flavors too.

This entry was posted in Uncategorized. Bookmark the permalink.

8 Responses to Psarosoupa or Greek Fish Soup, All Part of the Adventure! Crete, Part 2